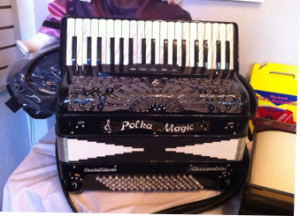 It’s damn near impossible to top DJ Kishka’s Polka Happy Hour, but as polka tourists on the loose in Cleveland, we had to try. So, we set off for the Cleveland-Style Polka Hall of Fame in nearby Euclid.

Here’s the problem. We spent so much time goofing around in the Tremont neighborhood (eating breakfast, taking photographs, and checking out The Christmas Story Museum) that we didn’t arrive at the front door of the hall of fame until 3:04p.m. That’s when we saw the sign that it had closed at 3p.m. OMG.

I was devastated. Not wanting to spend an entire evening with a dejected and utterly pissed-off wife, Joe glanced around in a panic and caught what he thought was a glimpse of a head. So he knocked on the door politely, a few times. With a newly injected glimmer of hope, I banged on the door. And banged. And banged. I wasn’t going anywhere.

Then like an angel she appeared–Beatrice Jerkich, the volunteer employee on the schedule that Saturday. I hereby nominate Beatrice as the Cleveland-Style Hall of Fame’s Employee of the Month. Hell, make it Employee of the Year! She let Joe and me in to wander and take pictures and buy goodies from the gift shop. She said we could stay for 15 minutes, but she didn’t kick us out when we stayed for 45. I heart Beatrice.

The Polka Hall of Fame rocked! I only wish I could have spent two hours there so I could have read every placard in the place and watched Polka! The Movie from beginning to end. Ah well–that’s what you get for not checking the closing time in the guide book. I’ll never make that mistake again. Check out a slideshow of pics from the hall of fame and the accordion museum, which I’ll mention in a minute.

Next stop – Frank Sterle’s Slovenian Country House. Talk about a 180 degree departure from the night before. The median age was roughly 40 years older than the Kishka crowd, but the experience was every bit as kick ass. I loved it the moment I walked through the entrance. Wood paneling, Slovenian flags and murals on the walls; Chicken Paprikash, dumplings and Wienerschnitzel on the menu. But best of all–a polka band! Check out the dancers. At the very end of this video, you’ll see a wonderful couple doing what I learned was the Cleveland-style of polka known as “the hop.” I must learn how to do this–I dance the German-style polka myself. I was completely smitten with this wonderful gentleman and was ready to move in for a dance and toss his date aside, but my wrist was throbbing from all the polka dancing the night before. Plus, at the time I still had my orange cast on and I feared that during a spirited spin I might accidentally club him in the head. So, I settled for a short conversation instead and got to watch him dance again, without me. Heavy sigh.

Day 3 was a Cleveland Indians game (not part of our polka agenda, but come on, we had to make an exception). After the game and just before cruising out of town, our final polka tourist attraction was the Cleveland Accordion Museum. This was…er…a bit unusual. Visits are by appointment only (I’m most grateful that he let us stop by on a Sunday afternoon) and the museum itself is actually the basement of a guy’s upscale suburban home. But that’s not the oddest part. In addition to hello and goodbye, the guy spoke about 10 words total. That’s fine, but if you’re that much of an introvert, would your heart’s desire be to open up your house as a museum? He was a reluctant docent, to say the least. Although we tried our best to get this guy to engage, here is a sample snippet of conversation.

Joe: (looking around at the unbelievably impressive array of accordions that lined the walls) “Wow. This is amazing. Do you have any favorites?”

Museum owner: “Yes (pause), I have my favorites.” (Joe and I look at him expectantly)

The rest of the conversation was pretty much a variation of that.

But hats off to this former player who has assembled the most impressive collection of accordions I’ve ever seen, some of which dated back to the 1800s. Definitely a stop on the agenda for any serious polka tourist. Yes, Frankie Yankovic said it best: Cleveland, It’s a Polka Town. Drew Carey also said it best: Cleveland rocks!