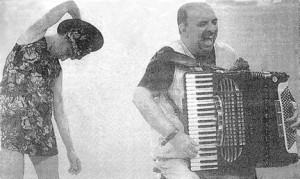 “Once Accordions Rising is released, people everywhere can come to understand that accordions have returned, not only with amusement, but with a beautiful, eloquent, haunting, and downright exciting vengeance!

Just imagine all those who are not “in the know,” and are missing out on so much interesting music. Together we can fix that.”

By reading this blog, you are already hip to the fact that accordions rule. Not everyone, however, possesses as much keen insight and good taste as you. Lucky for us, Roberta Cantow does. She gets it. She totally gets it. And she digs accordions–so much so that she made a movie about them. A really kick-ass good movie.

Check out the three minute trailer on her website to see what you have to look forward to once her documentary, Accordions Rising, gets released. Nice, huh? The website also lists the film’s impressive cast of characters, which includes, among many others, Guy Klucevsek, Will Holshouser, and, much to my delight, Walter Kuhr, the beloved former owner of New York City’s Main Squeeze Accordion shop who died earlier this year from lymphoma. He was only 59. I bought my latest accordion from Walter and was completely smitten by his charm whenever I was in his presence. I miss him. I’m awfully glad that a bit of his indelible spirit will live on through this film.

When I spoke to Roberta on the phone last week, she shared lots of stories with me…one involving the hot tip she was grateful to receive from a NYC friend about an event called Angels and Accordions (yes, it’s in the movie, along with lots of other awesome stuff). Think dancers, accordion players, funky flowing costumes, and the oldest cemetery in Brooklyn. Oh em gee. How cool is that? Seriously, that’s reason enough to contribute to the fundraising campaign needed to bring this film to fruition.

This brings me to her fundraising site on IndieGoGo. Up to now, Roberta has funded the research, film production, and editing entirely on her own. She hesitated to ask others for money until she knew it would be a film worth seeing. She realizes now that it is–and after talking with her, I realize that too. With our help she can broadly share this gem of a film, not only with musicians and accordion lovers like yourself, but with those confused and misinformed people out there who still think of the accordion as a punchline to a bad joke. They don’t get it, but they will…after they see the film.

Go to her site and make a contribution. I did. You can contribute any amount–even as little as a dollar. And if you aren’t able to contribute, please at least share the site with your friends on social media so that they might contribute $1 or $5 or $10 or $20, whatever. It takes a village…of accordion players and devotees.

We can do this. With apologies to Creedence Clearwater Revival, I see a bad accordion rising!