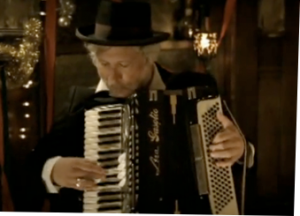 I’ve been waiting for Christmas just so I could finally post this awesome Bob Dylan video. Although it’s perfect on so many levels, let me provide a little background. Mitch Miller first recorded my now-favorite Christmas carol on his Holiday Sing Along album in 1961. Check out the video. I wasn’t listening then since I was T minus 1 years old…but I did grow up listening to my parents’ Sing Along with Mitch records, and I wore that vinyl out.

Fast forward to 1991, when the wonderfully fabulous band Brave Combo from Denton, TX (see my August 22 post), records their kick-ass polka version of Miller’s Must Be Santa on their album It’s Christmas, Man! Dylan clearly had their version in mind when he recorded his own Christmas album and not Miller’s. Here’s an article you can read that will tell you more.

So enjoy Dylan’s homage to Brave Combo. This is my kind of Christmas party. Happy Holidaze, everyone. May your Christmas be merry and, if you’re lucky, include a polka or two.

I wish my commute to work was more like this. : ) 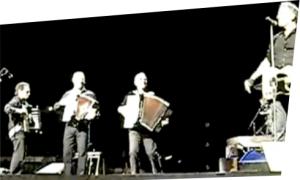 Bruce is cool enough to know that accordions add richness and depth to all kinds of music and smart enough to have had two kick-ass accordion players (Danny Federici and Nils Lofgren) in his E-Street band.

In this version of Springsteen’s Wild Billy’s Circus, you can listen for the haunting and beautiful strains of Federici’s accordion playing throughout, especially at the beginning. One of the Boss’ coolest songs from his first LP, “Greetings from Asbury Park.”

Or check out Bruce’s concert in Ft. Lauderdale last year, where he’s got three accordions on the stage at once. Lucky concert goers!

And for the trifecta of Bruce and his love and appreciation for the mighty accordion, we have the amazingly talented Nils Lofgren playing Flight of the Bumblebee. You can make fun of accordion only if you can do this. Otherwise, shut your mouth–it’s a damn hard instrument to play. And as an added bonus, here’s Nils at some strange little backyard party in Sweden jamming with some fiddle players. What’s up with the flower-power headband??? 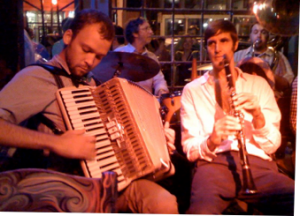 If you caught my performance of You Are My Sunshine a couple posts back, then you got a glimpse of the band that made even me look good–Panorama Jazz Band. This band plays nearly every Saturday night at the Spotted Cat in New Orlean’s fabulous Faubourg Marigny/Bywater district. Don’t miss it–the band or the neighborhood. Frenchmen Street (the home of the Spotted Cat and so many other great clubs) is one of my favorite hangout spots in Nawlins. Not planning a trip anytime soon? Well, you can still buy one of their CDs and dance around your living room.

And a big shout out to the magical city of New Orleans on the fifth anniversary of the day that bitch Katrina came to visit. Stay strong!

P.S. Here’s a performance I found on YouTube of the Panorama Jazz Band playing at the Spotted Cat just last month. Quality’s not great, but you get an idea of the spirit of the place and the spirit of the band. Plus this one features the accordion player front and center.