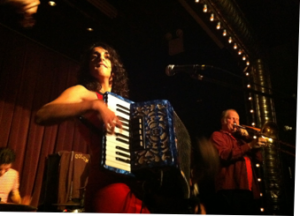 Annette Ezekiel Kogan is the reason I play accordion.

Jump back four years when Joe and I ended up at Capital Ale House in downtown Richmond for Oktoberfest. I wanted a beer, a pretzel and the chance to tap my toes while pudgy German men in lederhosen played some OomPahPah music. It was fun. The beer was cold, the pretzel was salty, and I love me some polka.

Feeling rather satisfied, we were headed out the door when some random bar patron told us a kickass band named Golem was playing next and that we should probably stay. We did.

Wow. The band AND the accordion player blew me away. Blew. Me. Away. After a lifetime of admiring and appreciating the accordion from afar, I went home and told Joe I wanted one of my own.

He got me one. I’ve been squeezing and squawking ever since.

Flash forward to this past weekend in Williamsburg, Brooklyn at a great little club called Union Pool. I already happened to be in NY for the 50th birthday of a dear friend of mine. His fabulous party was Friday, and Golem was playing in Brooklyn the very next night. I couldn’t believe my luck.

I dragged my friend with me to Union Pool and now Golem is one of his fav bands as well. Although, to my knowledge, he has not run out to buy a squeeze box…not yet.

Check out Annette’s rockin’ 5’ frame shredding the accordion that night (random fact: she happens to be playing a Main Squeeze accordion, purchased in SoHo from accordion great Walter Kuhr–See blog post of June 2).

Annette, and everyone in Golem, is super cool, which by extension makes the accordion super cool. Seriously. She said so. Just listen. 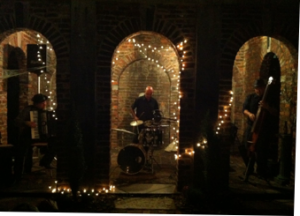 If you read my blog then you’ve heard the name Barry Bless once or twice or ten times. I can’t help it. This blog aims to bring the cool back to the accordion and they don’t come cooler than Barry.

He plays the accordion so beautifully it kinda pisses me off. But I don’t stay angry for long. I’m thankful there is such a kickass ambassador of cool for such a kickass instrument. Keep the faith, Barry.

Check it out for yourselves and tell me if this isn’t fabulous. Lawrence Welk he’s not–not that there’s anything wrong with Lawrence Welk, God bless his bubbly heart.

If you want more of Barry’s playing, and really, who doesn’t, check out the Happy Lucky Combo blog for a schedule of their upcoming gigs. They (as in Barry, along with super talents Pippin Barnett on drums and Dave Yohe on bass) play in Richmond all the time. You have no one to blame but yourself if you don’t go.

P.S. Speaking of accordion ambassadors of cool, you should check out my Tom Waits post if you missed it before. 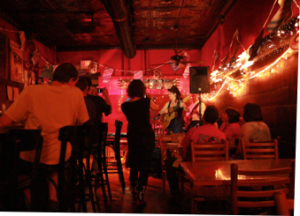 My God. I might as well have been a scuba diver swimming through shark-infested waters. OK, so that’s a slight exaggeration, but I’m prone to those. What really occurred is that I finally sat in with my friend’s band this past Sunday night and I played a song with them that I had been practicing for months. I was scared shitless.

But despite having subtracted years off my life, I’m glad I took the plunge. I have serious stage fright when it comes to playing the squeezebox in front of anyone other than my dog. See previous stage fright post from August 24, 2010. Sadly–the only way you can get over your paralyzing fear of playing in public is to play in public, or so my music-playing friends tell me. So I played.

I had a lump the size of a lemon in my throat from 8a.m Sunday morning until 8:43p.m. Sunday night (the precise moment I finished playing) and I lost three pounds of sweat. The lump was a little unpleasant but the weight loss helped me fit into my skinny jeans, so there was definitely a plus side.

I played some clunkers to be sure, but I kept playing and I didn’t stop and I didn’t run screaming from the room, even though I really really wanted to. That’s pretty good.

I will force myself to play in public again and am optimistic that one day it will feel more like fun and less like indigestion. Meanwhile, check out Loversville doing Waltz Across Texas. Oh yeah…that’s me on the left. 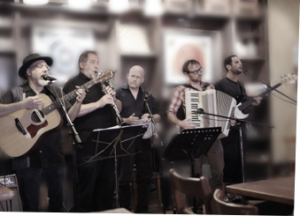 I have Jew envy.

My Jewish friends are some of the smartest, funniest, creative folks I know. They can lay claim to chicken noodle soup with matzo balls, Woody Allen, kickass dances like the hora, and some of the best weddings I’ve ever been to. But you know what I envy most? Klezmer is the music of their peeps. Sigh.

I love Klezmer. And I think you would, too, if you heard the local Richmond band My Son, the Doctor, a wonderful ensemble that University of Richmond English professor Louis Schwartz leads. You can learn more about the band and all of the fab musicians on their official Web page.

The band members are first rate. When I hear their rhythmic, minor-key melodies, I want to clap my hands and tap my toes. Also—though I can’t even begin to understand the lyrics, I feel like they’re speaking to me anyway.

Check out one of their recent performances at Elwood’s Café last August and you’ll see what I mean.

You can hear them again tomorrow night at the Camel on 1621 Broad Street, a great venue for local music. Sunday, September 11, is World Music Night, and My Son the Doctor is part of the line up. Music begins at 9 p.m., and the cover is only $5.

So I’m not Jewish but I can still get my Jewish jones by listening to the soulful and beautiful sound of an accordion mixed with a clarinet—the keystone of all Klezmer music.

And since this is my blog, well, here’s me playing the only Klezmer song I know. I think I need to learn another one. 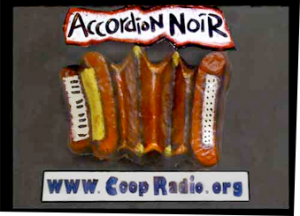 So if super-swell countrymen (and women), fab music, and a civilized national healthcare plan weren’t reason enough to dig Canada, now there’s the independent radio show out of Vancouver, AccordionNoir.

It’s my absolute fav new thing–new to me anyway; it’s actually been around since 2006. You can listen to the shows through live streaming radio or just download a past show whenever you have a jones for cool DJs and great music–great accordion music, that is.

It’s all accordion. All the time.

The first show I sampled was their April Fools’ Day show, Accordion Fools’ Day. I cranked it up on my laptop…folding laundry was never so much fun. Lovefool by Amy Cervini; Glass of Beer by Those Darn Accordions; Educated Fool by Los Fabulocos; Funny Bird by The Klaxons…it just never ends.

Seriously, check it out. You can choose from tons of first-rate shows, so browse away.

And for the folks lucky enough to live in Vancouver, Accordion Noir co-hosts Bruce Triggs and Rowan Lipkovits host a Squeezebox Circle the first Thursday of every month. There, accordion players gather in a local bookstore, talk accordion, and play. How wicked cool is that? Check out their website for all sorts of handy links.

Oh yeah…Accordion Noir also has a facebook fan page, so join it, eh?